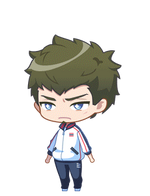 Yuzo Kashima (鹿島 雄三) is a former member of the old Spring Troupe who is currently a theater director in another company and frequently drops by Mankai to help out with coaching and giving feedback.

Yuzo is a stout man in his forties with sharp blue eyes and (sometimes) a mean glare. He has dark olive-brown hair and a bit of stubble on his chin. His clothes are quite simple, a gray t-shirt inside, and a white, black and red tracksuit.

Although Yuzo's critiques can sometimes be very harsh and a lot of the times lower self-esteem, he means well. His feedback is very helpful and he spares no feelings when it comes to critiquing your acting. He is quite straightforward and truthful when pointing out faults, and not sugarcoating his words. This is essential if the actors want to improve.

As mentioned before, Yuzo was a former Spring Troupe member and well-versed in acting. He was good friends with Izumi Tachibana's father, as well as Misumi Ikaruga's grandfather Hakkaku. The group lost contact with each other after the company's disbandment. Yuzo is now directing another theater troupe, but when he has free time he helps Mankai for free, as he is quite fond of it due to his past.