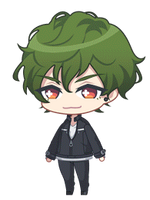 His own backstage stories

Yuichi Hasegawa (長谷川 悠一) is an Winter Troupe extra who is a highly confident model.

Yuichi is a tall man with green hair and rose-red eyes.

Yuichi is very confident and flirty as he tends to flirt with the director a lot. He is noted to be naive and arrogant, as he admits that acting was not as he expected. Although he has much pride, he isn’t afraid of admitting his flaws. Which makes him very good at self evaluation.

Yuichi is a skilled fashion model but wanted to try something new. When he heard that Mankai Company was, looking for new actors, he decided to check it out.