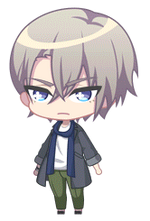 Tsubasa is a tall man with short hair and blue eyes.

Tsubasa tends to speak in an "overdramatic voice" because he suffers from 'second grader syndrome'. He is good at observing others and brainstorming, but he has a chance of getting too invested.

Tsubasa was recommended by Yuzo Kashima because he is a very talented actor.