Premium Tryouts is the second gacha in the Tryouts Tab. Unlike Limited Time Tryouts, the Premium Tryouts are permanent, but each month, have two to three special SSR birthday cards of the actors in their corresponding responding birthday months. The gacha takes

Gems (both free and paid) and 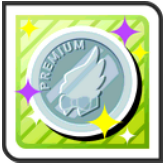 Premium Tokens.
The special cards will give small boosts during Events or Campaigns, displayed with a sparkle icon.

The cards you can obtain range from Rare (R) to Super Super Rare (SSR) in rarity. One pull for one card costs 15 gems, and one ten-card pull costs 145 gems. In the ten card pull, you're guaranteed to get one SR. The player gets one discounted pull per day that costs five premium gems. It costs five premium tokens to pull one card, and that card is guaranteed to be an SR or higher.
Note: Starting from the 2nd year of June Birthday Premium Tryouts each actor will have their own birthday tryout on their birthday. These will include the same cards as in the normal birthday tryout, but only the specific birthday character.

At the last two days of the month, and first day of the next, there will be a Special Actor Scout which costs 145 Premium Gems, only 10x pulls available, and the for Mankai Birthday cards odds will be increased greatly.

The following chart shows the birthday months that each actor's cards will be available on:

Odds shown are rounded off to 2 decimal places. The full number is used in the actual game calculation.

When performing a ten-pull, the rates for obtaining an SR rise to 3.85%.

(percent may vary depending on the Tryout!)