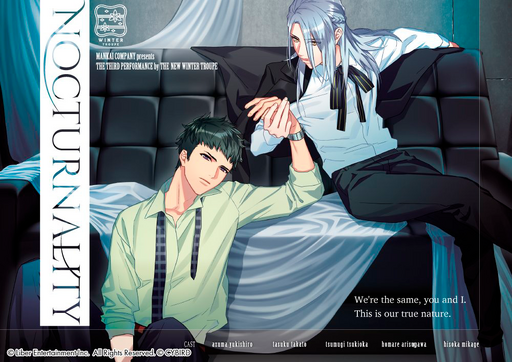 Nocturnality is the third stage play of the Winter Troupe. It was released on August 5th 2020 on the English server during the Nocturnality event.

The lead role, Azuma, was chosen as he was the only one who hadn't had a major role yet in their past plays, and it would be a good chance for him to gain more experience. The second lead, Tasuku, was selected as he would help guide Azuma and make it easier. The play is set in modern-day, and revolving around vampires and humans. Tsuzuru wrote a script to fit the mysterious and ethereal personality of him, however, because of his character's secluded and lonely life, along with Azuma's past, he had some trouble getting into character.

Kota Seo is an office worker in his 3rd year of employment. On his way home from work, he comes across a man collapsed on the side of the road.