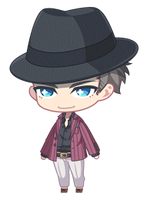 His own Backstage stories

Julian Yamashita (山下ジュリアン Yamashita Jurian) is an Autumn Troupe extra who is a fortune teller and his crystal ball is called Pacifico Spontini Jr.

Julian is a tall man with short black hair and blue eyes.

He wears a black hat which he considers as a part of his identity. He wears a red suit with a black shirt and white pants.He appears to be very calm and easy to talk to.

Julian was scouted by Izumi Tachibana after picking up one of the flyers she dropped. He was involved with theatre long ago and happened to dream about it the night before, so he believes fate is leading him to join the company. He is surprisingly knowledgeable about acting. He has been asked to read fortunes for various members on the topic of troubles with acting practice, success in love, and whether the next play will be a success; however, he doesn't read fortunes that concern himself. He also thinks such fortune-telling is pointless because plays are made successful through everyone's efforts.