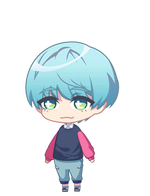 His own Backstage stories

Iku is a short boy with light blue short hair and green eyes.

Iku is a hardworking young actor who is eager to learn new things. Although he has been acting for a very long time, he won't call himself an expert like Tenma Sumeragi. He easily gets hurt and will start to cry when being yelled at, as seen in his backstage story after he got into an argument with Masumi Usui and Yuki Rurikawa. He tend to observe the other actors and is very amazed by Masumi's acting.

Iku was scouted by the director from another company. The Director often helps his troupe so they decided to repay the favor.

He has been acting since he was 6 years old.