The God Troupe is Mankai's rival theater troupe on Veludo Way. The two seemed to have a long history of rivalry, where both aren't on very good terms. The God Troupe is quite a successful troupe, earning large amounts of revenue in their plays, having big budgets in their sets, from props to costumes. The God Troupe is known for its flashy plays and acting.

They sabotaged the Autumn Troupe in Episode 3, where they had their spy infiltrator Taichi destroy costumes and send threatening notes if he wanted a spot in the troupe. The troupe challenged Mankai to an act-off in Episode 4, where the theme was angels. The Winter Troupe successfully won. They also challenged Mankai to another act-off in Episode 9, and the theme was devils, opposite to their previous theme. It was a topic that was very dear to Reni for some reason.

They have challenged Mankai to numerous other challenges, whenever they got the chance to undermine them, though most ending in their defeat. 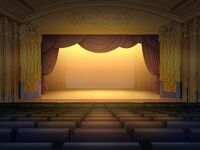 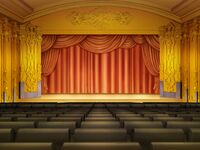 Add a photo to this gallery

He is the director of the God Troupe, who is quite hostile to Mankai Company. He seems to hold a big grudge against them, for some reason. Though his methods may be dirty sometimes to put on a glorious play, Reni does genuinely love theater and acting and changed in the 3rd Act, and was sincere about it. He didn't tolerate plagiarism and even apologized to Mankai about it.

In his teenage days, he was friends with Tachibana Yukio, and in high school was in a club together with him. They also knew and were acquaintances, if not friends, with Kashima Yuzo and Hinamori Kasumi.

He broke his promise with his parents to continue acting after graduating from high school, and helped with Yukio's dreams to make a theater called Mankai. Reni helped build it and promote the theater, however left early on as well.

He is the top actor of the God Troupe and is very close to Reni. Tasuku was working with him, before he quit. He was first seen in Prologue - Mankai Company where he was doing a street act with Tasuku. He is rather rude and has a condescending personality, and hates Mankai just as much as Reni. Haruto always tries to mock or bring down Mankai, trying to humiliate them whenever he gets the chance. He uses an alias to hide his real identity. Once Tasuku called him by his real name; Genta Yamada, and Haruto accidentally changed dialect. He usually has some what of an elegant vibe, and charming at least to fans. However, Haruto grew up from a poor household in Kansai, and moved to Tokyo after he was captivated by the showbiz world, and joined the God Troupe. Haruto complains about others a lot, is easily annoyed, and has more or less of a superiority complex. Very haughty and stubborn. He has much confidence in himself compared to other people and Mankai.

Azami's childhood friend, who had been very close, but had somewhat of a fight when Azami went on and started acting, which happened to be Shifuto's dream too to be in theater and the latter was jealous though he knew it was wrong to feel that way. They made up when Kumon brought them together. Despite being new, he was decided to be the lead role in the God Troupe's play in their second act-off with Mankai.

Tasuku was with the God Troupe for some time, and was their prized top actor. He decided to quit the God Troupe in Episode 4 - Once More, with Feeling because he was tired of all the dirty work that Haruto and Reni did to sabotage and destroy Mankai Company. He later joined the Winter Troupe as he had no place to go when he was blacklisted by the God Troupe.

He joined the God Troupe because he hoped that he, one day, could be the lead actor. He was later promised this role if, he joined the Mankai Company to sabotage their next show. He agreed, even though he hated the thought of destroying someone else's work. Later on, he confessed to his troupe, and he quit God Troupe to fully join Mankai. Taichi wanted to prove to Reni that a once 'ordinary' and 'generic' actor bloomed into someone as successful as he was now.

He auditioned for the God Troupe with Tasuku together a long time ago, but Tsumugi never made it in. Reni told him that an actor like him shouldn't act at all. This caused a blow in his self-esteem and he quit acting for some time. However, he has healed from it and gained even more confidence since then, and wanted to prove to Reni that he was different now and was worthy to be on stage.

Retrieved from "https://a-three.fandom.com/wiki/God_Troupe?oldid=7499"
Community content is available under CC-BY-SA unless otherwise noted.