In this guide we will take a look on how each tabs on the homescreen works. We will start with the Home tab and then continue to the right. Please view the Table of Contents if there is a specific tab you would like to learn more about.

The large banner shows any major announcements, such as events, how to play the game for beginners, and the Premium Scout banner.

The smaller banner underneath are the Beginner's tasks which will later be replaced if you have finished the Beginner’s tasks.

At Presents, you can check what unclaimed items or rewards you have, as well as look at the history of what you have claimed. There’s also a convenient way to view each kind of item you want, and a pink “Claim all” button below that claims all unclaimed items (max of 100 items at a time).

By touching the ‘All/All’ button in the upper right corner, you can view items according to their Expiry, and then according to what kind of item they are (Gems, Cards, Friend Points, Coins, or other Items).

This is what your Friend area would look like!

The first thing you would see is a list of your current friends. If the pink flower button is not grayed out, it means you can give your friend a little friend point boost! Pressing that button gives you and your friend 20 friend points each. To give this to all your friends, press the pink button at the bottom that says Give Flowers to Everyone.

The second tab on the left, is where you can view or cancel your sent friend requests.

The third tab on the left are your Pending Requests meaning friend requests that have been sent to you that you have not either accepted or rejected.

Finally the last tap, Find, is for you to manually search for a friend using their User ID.

The Story area has five different Story types: the Main story, the Backstage stories, the Mini Chat, Events, and Others.

When accessing the stories, the button on the top right shows only the unread chapters!

The Backstage story shows the characters according to their respective troupe. You will unlock these stories by gaining affection (filling out a heart) for each character card.

Similar to the Backstage stories, the Mini Chat are sorted according to troupe. These are unlocked during practice lessons.

The Event stories shows stories from events that you have or can unlock.

The Other/Cross Backstage story has stories of two specific actors. The long grey on top sorts the stories according to when they were released (per year). These stories are unlocked by getting the SSR cards shown. (You can click on a locked story to view the specific name of the cards)

The Actors area lets you edit the actors of the teams you bring with you for your Show, to train and bloom (awaken) individual cards. 1 on 1 raises the cards level and skills, while the Training raises the cards stats and Ad lib skills. You can also view your actors in the Actor List and Lobby (if you have moved them to the lobby), or dismiss actors from your Actor List. (Note: dismissing actors will not be removed completely as they are registered in the Roster that can be found on the Menu.)

The Edit Team area has three different team compositions, which are used for different parts of the game.

The Practice Team are used during Play Practices. You can form five different teams!

The Suggestions button automatically chooses the strongest cards you have according to your choice of group: either from all of your cards, or from one of the four troupes.

The Show Team are for the actors you will bring during a show. As such, the Suggestions options differ from the first tab - here the game chooses the strongest from either all of your cards, or according to each Attribute you’ve chosen (Comedy; Action; Drama).

Certain cards, when put together, also have Team Skills that increase certain attributes!

Finally, the third tab is the Favorites tab, where you are free to choose your five favorite cards and the display button at the bottom displays your selected cards side-by-side!

First off, you’ll have to choose which show you’d like to play.

Here you can view how many practises and missions you have cleared. You can also see the play in the Theater or do a Show (these will be explained later.)

Next is selecting which practice session you’d like to attend. The number in the purple area is the LP required for that session, so take note!

Each session has three flowers that indicate “Flair” and three missions! (Missions can be viewed by touching the details button) Each cleared mission and cleared flair flower (aka an unlocked in-lesson story/talk) will reward the player with one diamond. When you complete all three missions you will be rewarded with 3 diamonds.

Here we have the practice session screen! It’s generally straight-forward, and requires very little from the player, to the point that an Auto button is readily available.

The Menu button opens this screen, where you can view your Log, or the Missions for this practice session, as well as how many items you’ve picked up at this point in the session. You can also choose to Pause, Quit, or Resume the session using the buttons at the bottom.

Theater leads you to an area where you can watch the play being “performed”. You will need platinum tickets to view a show, but before that, you get the chance to select the cast from your current card roster!

The Cast button shows you the original cast members for the play for each role, while the other button, Summary, gives you the summary of the of the play. Pink button on the bottom starts the play, so sit back and enjoy!

Note: You will need SP to play!

First off, choose from the list showed to you for the Guest you will be having for your show.

Next, choose from your units which will be performing. Take note that you need to be able to meet the point requirement, as shown on the bottom left (the number followed by P)! You can check if your selected unit is strong enough by looking at your estimated points (the number under Boost).

To boost your scores, you can choose to increase it up three, five, eight, or ten times, which will cost you 1 SP more as you increase (so for example, multiplying it by 10 will require 5 SP). The amount of SP required will be indicated by the yellow bubble on top of the “Start Performance” button.

Once you’re good to go, press the Start Show button and enjoy! 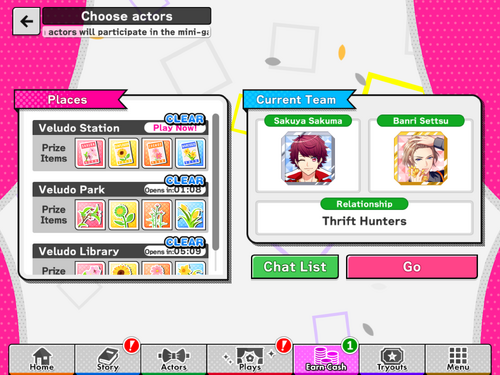 When you’re available to do Earn Cash, a green number will show up above the tab showing you how many you have available.

The items listed in each button are the possible Prize items.

Tapping the face of each character will bring up a selection screen. Choose any characters you like. The text below them will change depending on who you choose. This will affect the character dialogue.

Clicking on Chat List will let you view which characters have cleared the different places. 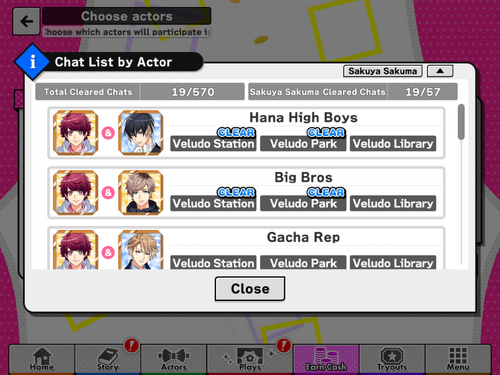 You have 30 seconds to tap hearts to earn coins. Each time you tap a heart, it will burst, and coins will be rewarded. Sometimes items will drop, too, in the form of treasure chests. 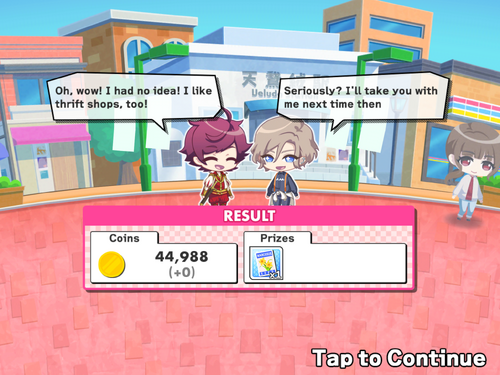 Your coins will be added and the treasure chests will open to reveal the specific items you have received. Your characters will also say something else, too, as they did in the beginning.

Clicking on the Tryout History in the corner will let you view your most recent scouts and where you scouted them from.

Clicking on Tryout Info will give you info about the scout, but more importantly, it will give you the cards inside and the chances (in %) for getting each card.

Here’s the first tryout, the limited time tryout. These tryouts are often associated with the current Event. You can only use gems here!

In Premium Tryouts you can use Gems and Premium Tokens to pull. Only R to SSR cards are found in this tryout.

The Paid Pull can only use paid gems.

The Single Pull will, obviously, get you just one actor, ranging from R to SSR.

The Premium Medal Scout will scout you 1 SR actor.

This scout only has Ns and Rs.

This is the menu where you can view your profile, inventory or badges. You can also check the Roster to see the cards you have gained or played with when choosing a guest during Shows.

The Gallery shows pictures unlocked in the Main Story and the Jukebox shows the music you have gained.

By now, you may or may have noticed a colorful rectangle beside usernames of your Friends or on your Guest list. Those are badges, and they have nifty titles that say a lot about you as a player.

These can be accessed from the Menu.

These titles can be obtained by fulfilling a specific requirement, which you can check by pressing '???' on the badge you haven’t unlocked.

If you have any questions the Help in the Menu gives a great explanation on how to play the game. If you have a question about ,for example, how the Training works in the Actors tab, you can click the round ”How to use” button.

Also, don’t be afraid to ask in the comments below or message any of the members on the A3! Wiki.

Retrieved from "https://a-three.fandom.com/wiki/Beginners_Guide?oldid=7461"
Community content is available under CC-BY-SA unless otherwise noted.