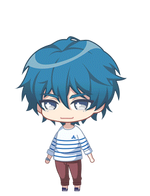 Arata Seto (瀬戸 新太) is an ensemble cast of the Spring Troupe.

He usually wears a white jumper with blue stripes and a grey watch.

Arata is a very calm guy who is very natural with a clear voice when he acts. He is very eager to practice acting. He is very good at noticing small but important details.

Arata is in a drama club at college where he has some experience with using his voice. He is not experienced with acting, but wants to join a troupe to study it. He has been a big fan of the Mankai Company ever since he first saw them act. He was invited to a show by a friend. He was very happy when he was elected to join the Spring Troupe, which also is his favorite troupe.