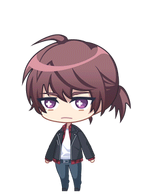 His own backstage stories

Akito is a young man with shoulder-length brown hair that is worn in a ponytail and magenta eyes.

Akito is a very straight-forward guy who has a deep passion for rock.

Akito is a musician who loves rock. He has no acting experience but was brought in by the manager, after sharing his struggles with lyric writing him, in a music shop. Matsukawa told him that acting might solve his problem, and so he ended up joining Mankai.

After joining the troupe, he got many ideas for songs with different taste than before.